World Town Planning Day is our major outreach event of the year. It will also be the first BTPS in-person event since before lockdown and will be held at the Courtyard by Marriott on Tuesday 8th November 2022, starting at 9.00 am. This will be a “FREE, BY INVITATION ONLY” event and all BTPS Members are invited.

The theme of the Symposium is “De-carbonising Barbados: Impacts for Physical Planning, Green Transport and Mobility”. We have arranged a number of interesting speakers and the Opening Address will be delivered by Senior Minister Dr the Hon William F Duguid JP MP. A copy of the programme is attached.  BTPS Agenda WTPD 2022

Space is limited and we want to accommodate as many stakeholders as possible. It would therefore be a great help if all BTPS Members who want to attend could register as quickly as possible and by Friday 28th October at the latest to ensure that you get a place. Please use the Google forms link below to register. This will help us to see how many places we have available for guests.

Presentations have been uploaded here:

The 2022 Caribbean Urban Forum (CUF) Conference in Barbados was held from 15th-17th June, 2022 as a hybrid of physical and online meetings. This year’s theme was Beyond COVID: Recovery – Renewable – Resilience.

We have created a YouTube Channel with some of the meetings and presentations from the conference:
https://www.youtube.com/channel/UCFVRODLw7q3xFJ-4qovJnWA

Planning practice in the public service is of course underpinned and guided by the legal and institutional framework for the regulation of the development of land.

Planning law in Barbados has recently been transformed by the repeal and replacement of the Town and Country Planning Act, enacted in the 1960s, by the Planning and Development Act 2019. The new Act makes radical changes to the administrative system for physical planning and development control as well as modernizing the philosophical approach to planning.

To begin with, mention should be made of the open process by which the new legislation was arrived at and adopted. This began with a PUBLIC CONSULTATION PROCESS kicked off by the PM on 16th July 2018 – within weeks of the change in government. The initial discussions (which were carried live on the GIS website and followed by a national and international audience) were followed by a GREEN PAPER which was published for further public comment. The Bill was laid in the house in December 2018, within 6 months of the original discussions, and enacted in January 2019. When it was subsequently decided to amend the Act to transform the TCPDO into a ONE-STOP-SHOP for planning and building approval, a further round of STAKEHOLDER CONSULTATIONS was held in 2019 and the necessary amendments were passed in March 2020. Hence, it can be said that there has been general buy-in by stakeholders – including relevant professionals and developers. It should be noted that the BTPS led all the public consultation exercises involved in the development of the new legislation.

The purposes of the Act speak to –

To give Barbados credit where it is due, this is the only country in the region which has substantially complied with its statutory obligations vis-à-vis land use planning under the old legislation. However that process was very outdated and not reflective of modern planning practice. Hence, the system of development planning has been modernized and made more participatory and the legal status of the development plan enhanced. Express provision has been made for the adoption of supplementary planning policies. This is intended to eliminate reliance on “desk-drawer policies” which are the bêtes noir of planning practice in the Caribbean.

As regards development control, with the exception of applications referred to the Minister, all major decisions will be made by a multi-disciplinary public-private sector Board. Only applications of national strategic importance will be referred to the Minister. All applications will be processed by the professional staff of the Planning and Development Department, who will also decide minor applications. Strict deadlines for the processing of applications have been set. The system is premised on the principle of facilitation of land development (getting past “No”/getting to “Yes”). The Act expressly states that decisions must be guided by a presumption in favour of granting planning permission – in cases where applications can be approved if modified, a entirely new form of decision “provisional refusal” will issue, which only becomes refusal if the plans are not modified.

The Department will function as a “One Stop Shop” for building as well as planning control, but most building plans reaching the Department will have been certified by registered professionals who will assume general responsibility to ensuring conformity to building codes and standards. This element of the legislation builds on an aspect of the new legislation (PADL) adopted in TRINIDAD & TOBAGO a few years ago (2014), but not yet fully proclaimed.

Provisions for the protection of the natural and built environment have been greatly strengthened. This aspect could be of great significance as the situation with environmental law in Barbados is in need of comprehensive review and improvement. Environmental management is the subject of various pieces of unrelated legislation administered by several different agencies. We have not yet achieve the union of institutional responsibility for physical planning and environmental management that was achieved by JAMAICA some two decades ago and has just been effected in SURINAME, which is about to embark on the development of a new Spatial Planning Law.

A new and transparent system for the hearing of appeals against the merits of administrative decisions by an APPEALS TRIBUNAL has also been introduced. The system has been depoliticized, regularized and opened up to public scrutiny. The right of recourse to the courts of law to challenge the legality of regulatory decisions is unaffected.

The potential benefits of the new legislation have not been fully realized to date because the required institutional strengthening of the Planning and Development Department has not been given the same urgency as was given to the enactment of the legislation. Setting aside the requirements for the start up of the “One Stop Shop” for the time being (as that part of the Act has not been proclaimed) there are other capacities that must be built up as soon as possible – for example: establishment of an Environmental Service Unit in the Department, which is critical to the new EIA process provided for in the Act and EIA Regulations. The efficiency of the system for decision-making provided for in the new Act depends as much on having adequate and appropriate staff in the Department as on a radical change in the institutional culture of the Department.

We have extended the deadline for the Call for Papers for Caribbean Urban Forum 2022. The new deadline for submission is March 28th, 2022. Abstracts submitted by this date will receive feedback by April 12th, 2022.

Barbados will be hosting the 2022 Caribbean Urban Forum (CUF) Conference and it will be held from 15th-17th June, 2022 as a hybrid of physical and online meetings. This year’s theme is Beyond COVID: Recovery – Renewable – Resilience.

Caribbean Urban Forum is the premium Conference on urban and land planning in the Caribbean held annually since 2011. It brings together planners, academics, urban and land managers, high level decision makers and other allied professionals for knowledge dissemination, capacity building and policy dialogue.

Exciting news!  Barbados will be hosting the 2022 Caribbean Urban Forum (CUF) Conference and it will be held from 15th-17th June, 2022 as a hybrid of physical and online meetings. This year’s theme is Beyond COVID: Recovery – Renewable – Resilience.

Caribbean Urban Forum is the premium Conference on urban and land planning in the Caribbean held annually since 2011. It brings together planners, academics, urban and land managers, high level decision makers and other allied professionals for knowledge dissemination, capacity building and policy dialogue. 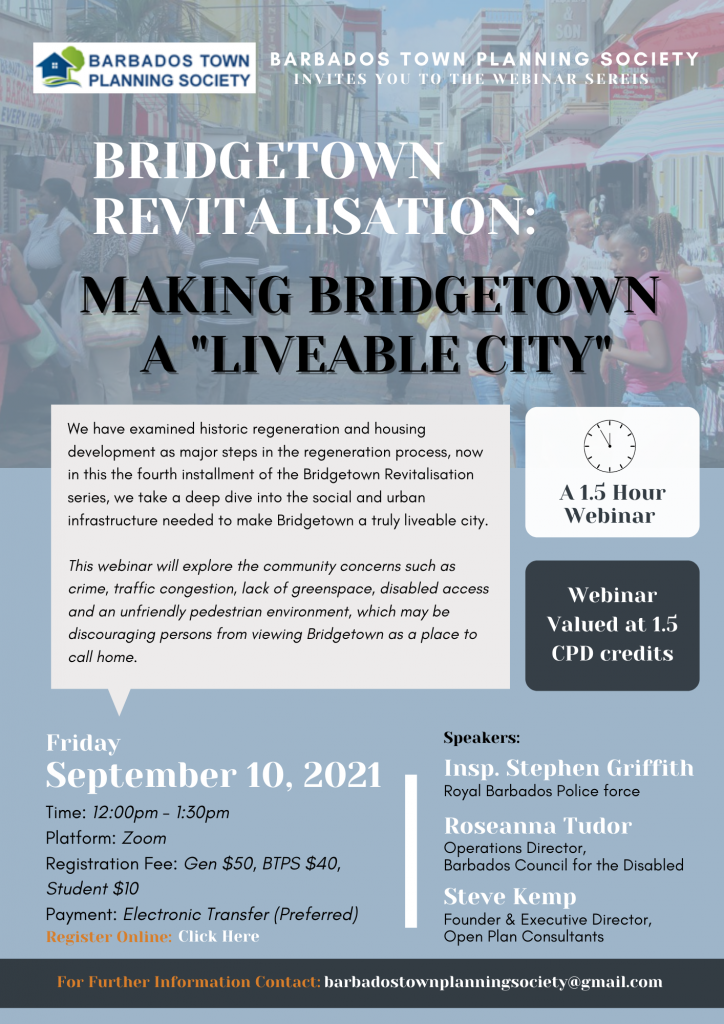 The Barbados Town Planning Society held its lunchtime webinar on 21 May, 2021.  Presentation documents at bottom of page.

What is a city without people? In the third webinar in our series on Revitalising Bridgetown, we look at housing and the human factor. To what extent can new-build housing or the refurbishment of existing buildings for housing use, help to bring life back into our capital city?

Key questions to be addressed are:

The Barbados Town Planning Society invites you to attend a its Webinar on Friday 26th February, 2021 at 12 noon called “BRIDGETOWN REVITALISATION – Heritage: A Doorway to Regeneration”.

Can heritage and cultural-led regeneration hold the key to Bridgetown’s future and its return to a vibrant multi-functional centre, especially in a post-pandemic world?

In this follow up to our World Town Planning Day webinar “Bridgetown Revitalisation” we expand on the conversation surrounding the rebirth of the capital city through a heritage focused lens; exploring the projects and key drivers needed for a successful transformation.

Sir Paul Altman shares his experience of delivering successful projects in historic Bridgetown and discusses the challenges and opportunities of heritage-led regeneration with a panel of experts including himself, Dr. Janice Cumberbatch (Lecturer at (CERMES) UWI, Cave Hill) and Mr. Richard Gill (Planning Consultant at Richard Gill Associates).

This webinar is valued at 1.5 CPD credits. 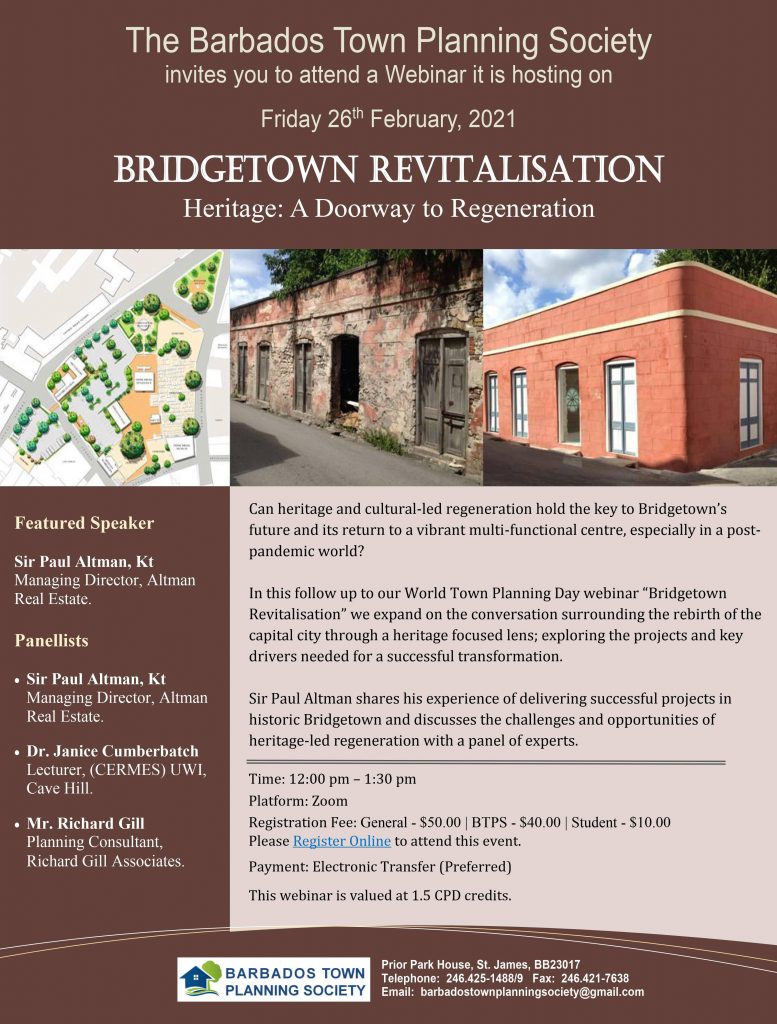 Description: Bridgetown has experienced a slow exodus of commercial activity over the past decade that has reduced its significance as a capital city. This webinar will explore ideas of how to revitalise Bridgetown as a vibrant multi-functional centre which is even more necessary for restoring its significance post-pandemic.

You are invited to watch the symposium via the below link: 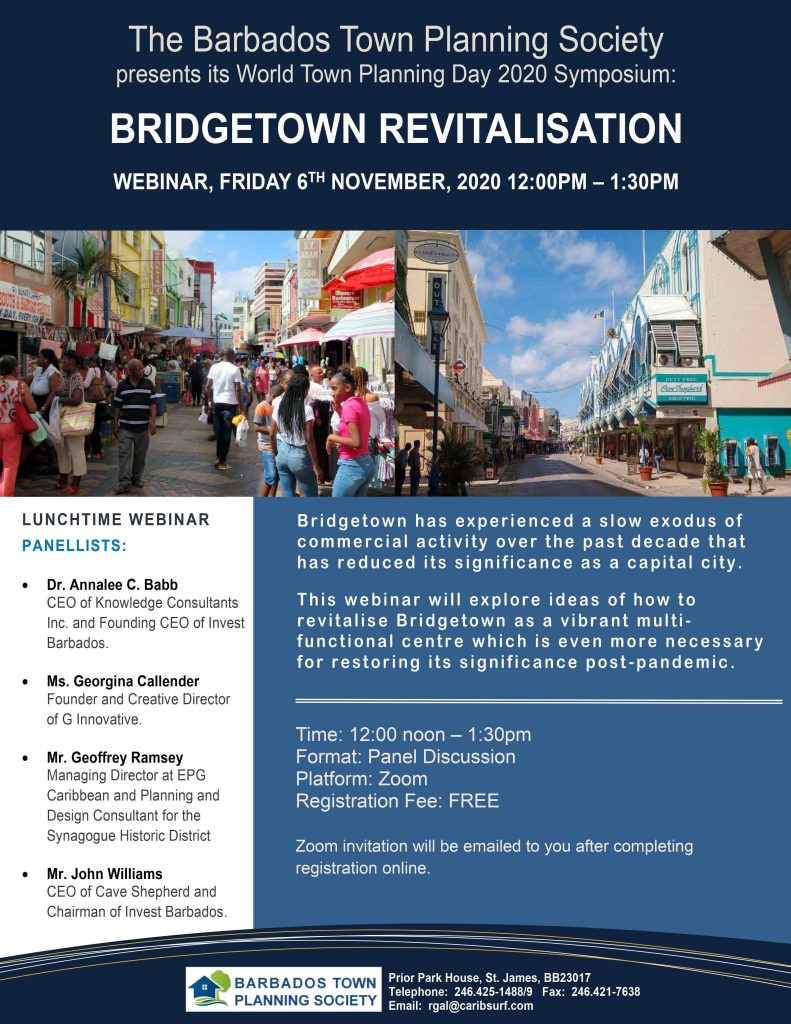