When Prime Minister Mia Mottley was elected in May 2018 one of her first actions was to start a programme of radical planning reform in Barbados. The existing legislation was in its essence over 50 years old and pre-dated Independence. It operated in a closed and opaque manner and was seen as being at risk of corruption as well as being tortuously slow. The new Prime Minister stated that planning reform was “mission critical” as part of her overall programme to address the country’s severe economic problems and remove barriers to progress.

The Planning and Development Act 2019 aims to provide a system that is open, transparent, accountable, inclusive and efficient – fit for purpose in the context of a Small Island Developing State in the twenty first century. The legislation provides for a new Planning and Development Board that will consider complex applications while the majority will be delegated to the Chief Town Planner. A new Appeals Tribunal is also being established.
Innovative elements include a “provisional refusal” to allow for extra negotiation and “approval in principle” at the concept stage (replacing the traditional outline consent which is planning permission in law). The system is being opened up, with much more opportunity for public participation and public access to information. The new Act was passed by both Houses of Parliament in January 2019.

Barbados Town Planning Society (BTPS) has long argued the case for reform of the system and back in 2014 held a Symposium on Modernisation and Transparency in Planning. This was followed by publication of our Prospectus for Change in 2015 which set out detailed recommendations for reform.

Following the May 2018 General Election, BTPS worked with Government to deliver two stakeholder events in July 2018. The Prime Minister attended and spoke at both, showing how important she regards this reform. Both events were live-streamed. The Prime Minister then appointed a consultancy team consisting of three BTPS members and a specialist planning and environmental lawyer to deliver the new legislation. That team then prepared a Green Paper for consultation and BTPS submitted a comprehensive response. The consultancy team went on to draft a White Paper and produce a Bill for consideration by Parliament. The team also helped Minister Marsha Caddle MP (responsible for Economic Affairs and Investment) present the proposals at a final stakeholder review and on a radio call-in programme.

Remarkable progress has been made in a six month period. However, the work is not finished yet. The next stage is the drafting of a new Development Order, a new Use Classes Order and new Regulations to support the Planning and Development Act. There is also a need for a major training and culture change programme to support implementation of the new legislation. Ultimately, it is achieving this change in working practices and attitudes that will be essential to making a success of the new system.

Please note that as of the date of this post, the new Act is still to be proclaimed.

The Barbados Town Planning Society hosted a seminar on Friday 22 June 2018 entitled “Can Barbados Manage a Day Zero When the Taps Run Dry?”. It was held at the Courtyard Marriott Hotel from 9:00am to 1:00pm.

The seminar explored the extent of the problem facing us, measured that we need to take to address the situation and what the town planning system and the development industry can do to assist.

The RTPI will be celebrating this year’s World Town Planning Day (WTPD) with sister institutes and planners across the globe with a big programme of activity and the publication of a vital new guide, Delivering Better Development: The role of the urban and rural planner. 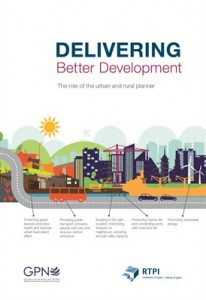 Aimed at non-planners including politicians, community leaders, architects, engineers, environmentalists and those interested in studying planning, the guide, written in conjunction with the Global Planners Network (GPN) , sets out a very powerful case for the part planning and planners can play in helping to tackle some of key challenges we face globally.